New Year’s Day is observed as a holiday.

Waterloo Day. This is not a holiday, but this anniversary is remembered on Battalion Routine Orders.

Assaye Day is observed as a holiday. A challenge to a game of football is issued by the Sergeants’ Mess to the Officers’ Mess bi-annually with each Mess choosing the team that will play for the other mess. The form of the challenge can often be very ingenious! After this traditional football match, the Warrant Officers and Sergeants are invited into the Officers’ Mess for drinks and lunch.

The Men’s Annual Celebration Dinner is held on Hogmanay, where the Other Ranks are served in the dining hall by the Officers, Warrant Officers and Senior Non-Commissioned Officers. Then at 11.30pm on New Year’s Eve (Hogmanay) the Battalion assembled, unless prevented by circumstances, at a convenient rendezvous, and “Old Father Time”, the oldest soldier dressed in a white gown, wearing a beard and in bare feet carrying a sickle, is escorted on a cart to the barrack’s gate and ceremoniously kicked out into the night. The procession is headed by torch bearers and the Military Band play “Happy we’ve been a’ together” (if the Military Band is not available, the Pipes and Drums play). As midnight strikes, the youngest soldier or drummer boy in the battalion wearing No.1 Dress (Ceremonial) is drawn on a cart to the barrack’s gate from outside. He knocks on the gate and is challenged by the sentry with “Halt, who goes there?” He replied by calling out “Nineteen Hundred and (so and so)!”, the new year. To which the sentry replied, “Pass Nineteen Hundred and (so and so). All’s well!” The procession then entered the gate and headed by the torch bearers and pipers playing “A guid New Year to ane an’ a’!” proceeds to a suitable central place, where the New Year is put down and given a drink by the Commanding Officer. The youngest soldier then recites the Regimental Toast in full and the Commanding Officer proposes the health of all ranks in the New Year. Everyone is given a drink of rum punch.

On discharge after completion of at least 22 years’ service a soldier will parade at the Sergeants’ Mess, from where he will be chaired by men of his own rank, and carried out through the barracks headed by the bands with the route lined by the rest of the Battalion. By the barrack’s gate he will be put down and the Commanding Officer will make a short speech and offer the departing solider a dram. He will then be given Three Cheers by the battalion before departing the barracks. 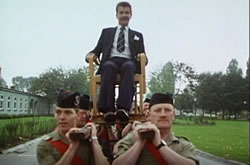 ‘A guid New Year to one and a’. with picturesque and dramatic ceremonies – as old as the Regiment itself – the famous 1st Battalion, Seaforth Highlanders welcome the New Year in Dover, Kent, 1929. Click on the video to watch.

Whenever “Three Cheers” are called for, except on official parades, the cheer leader will call “and one for Cabar Feidh” after the three cheers have been given.
This fourth cheer is always the loudest!

At guest nights one or more members of the Military Band accompanied by the clarsach will sing ‘The March of the Cameron Men’ in gaelic.

At guest nights four subalterns, who have been “passed off the floor” by the Commanding Officer as being good enough to dance at a mess dinner, towards the end of the dinner and still wearing full mess dress will perform a strathspey and reel to entertain the guests.

BBC In the Highest Tradition

When a Commanding Officer is dined out at a guest night, before the diners rise from the table his brother officers will stand on their chairs with one foot on the table and toast the Commanding Officer’s health and when their glasses are empty drop them over their left shoulder.

BBC In the Highest Tradition 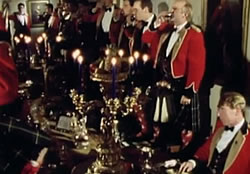 When called for by the Commanding Officer at the end of a guest night dinner, instead of rising from their chairs and retiring to the ante room, the dinner may end with a 78th Walkround. The pipe major will enter the dining room playing the ‘78th Walkround’ and moves clockwise round the table. Mr. Vice, typically the youngest officer present, will get up and follow him. The officer then taps another officer on the shoulder, who then also gets up and follows the youngest officer with a hand on his shoulder. This next officer does the same and so on until everyone has risen from the table and the procession then leaves the dining room.

is reputed to be the first in the British Army. It originates from the 78th Highlanders and was always a Sergeants’ Mess and not a Warrant Officers and Sergeants’ Mess. The story comes from the early days when the Regiment had more Gentlemen than available commissions and formed the Sergeants’ Mess for the younger gentlemen.

A Burns supper is held annually by the Sergeant’s Mess on the nearest appropriate date to 25th January to which the Commanding Officer, other field officers and late entry (LE) commissioned officers are invited. Mess members are appointed to recite poems and songs to commemorate the greatness of Robert Burns. The Commanding Officer is invited to recite the Address to the Haggis. One of the “late entry” of field officers is invited to reply with verse to the Sergeants’ Mess.

The Sergeants’ Mess holds an Annual Ball in November and it is one of the few occasions when Mess members wear the kilt with mess dress, as trews are normally worn at Regimental Dinners. Field and late entry officers and their ladies are invited to the Ball, which is the main event of the year for the Sergeants’ Mess. The Regimental Sergeant Major, if he wishes, can ask the Commanding Officer for permission to display the Battalion’s Colours in the Sergeants’ Mess and this is normally done for the St Andrew’s Ball and at Mess dinner nights.

‘The Land of Hills, Glens and Heroes;
Where the Ptarmigan thrives,
And where the red deer finds shelter.
As long as mist hangs o’er the Mountains
And water runs in the glens,
The Deeds of the Brave will be remembered.
Health and Success forever
To the lads of ‘Cabar Féidh’!
The Deer’s Horns forever!’

Almighty God, whose Son Jesus Christ commanded his disciples to watch and pray, grant that we, The Queen’s Own Highlanders (Seaforth and Camerons) mindful of the valiant deeds of those who have gone before us, may be ever watchful. And we pray that as one family, vowed to help our Sovereign against our nation’s enemies, we may stand fast in loyalty and integrity, and so prove ourselves worthy of the trust committed to us, for his sake, the same Jesus Christ our Lord. . . . Amen.